CAN Bus to Ethernet Gateway Interface

It is suitable for applications where processing of CAN Bus messages in the Ethernet gateway is needed, including, for example, visualization of CAN messages via web server, and complex protocol conversion. The 454MHz Freescale ARM9 CPU provides significant power for such applications. Higher Layer Protocol support is optionally available, including CANopen and multi-protocol stacks, and ready to use CANopen to TCP/IP gateway.

The implementation in a small, compact and rail-mountable housing eases the use in electrical cabinets. Additionally the connection of the USB 2.0 full speed host interface with a Bluetooth or WLAN Stick opens up the possibility of wireless data transfer.

It also provides an integrated SD Card slot for bulk exchange of data and logging of CAN messages. Both CAN channels are galvanic separated. 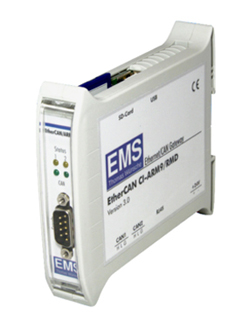 Treated as a member of the CPC family of PC to CAN bus interface products, the EtherCAN CI-ARM9 benefits from the CPC Software Interface Framework, which provides a consistent host software interface environment for Windows and Linux based applications that is independent of the PC hardware interface being used.

A variety of software tools can be used in conjunction with the CPC PC interfaces and adapters to extend funcitonality for network monitoring, analysis, and software design.

Need a different type of CAN PC interface? No problem, other USB, PCI Express and Ethernet options are also available.

Any (also temporary) stress in excess of the limiting values may cause permanent damage on EtherCAN CI and other connected devices. Exposure to limiting conditions for extended periods may affect the reliability and shorten the life cycle of the device.

All values, unless otherwise specified, refer to a supply voltage of 24V and an environmental temperature of 20°C.

Traquair reserves the right to change specifications without notice.

Copyright © 1996 - 2021 All Rights Reserved. All trademarks acknowledged. Report problems to the webmaster.